August markets continued relatively quietly, still being led up by the tech stocks, September has seen a change in the mood and a sharp sell-off in the NASDAQ – quite satisfactorily correcting by 10% from the 2 September peak.

The S&P 500 followed suit with a 7% fall. Putting the moves into a bit more context, the S&P is actually unchanged since our last note on 11 August and the NASDAQ is marginally ahead.

Other markets were less exciting, London stocks drifted down by around 2% over the period, worried about the strength in sterling (its effect on overseas earnings) and, latterly, by the US retracement. As Brexit returns to the headlines, sterling is now under pressure again while the US dollar appears to be steadying after the fall over the previous quarter. Eurostoxx really went nowhere, though German stocks looked the happiest as the major car companies (BMW, Volkswagen, Daimler) continued to recover. The Japanese market rose around 3% over this period led by Nintendo and a better market for their banks.

The markets had been led up by Apple, Amazon, Facebook and, most notably, by Salesforce, which reported a bumper quarter and rosy outlook, leading to a 26% jump in their stock price on the announcement. After the 10% jump in Apple’s stock price at the end of July, it carried on to gain a further 30% to the peak on 2 September prior to an 18% correction over the past week. Dramatic moves for a company of this scale, capitalised at comfortably more than the entirety of the FTSE 100 Index.

A company that we don’t often talk about is Walmart, but they have had a good year, gaining customers over the period of the pandemic and recently announcing the launch of a subscription service to rival Amazon Prime, and, quite surprisingly, partnering with Microsoft in a potential bid for the US TikTok business. Their stock has behaved more like a NASDAQ star than a food retailer this year, up by 27% to the early September peak, the March crisis not overly evident (see chart, right). 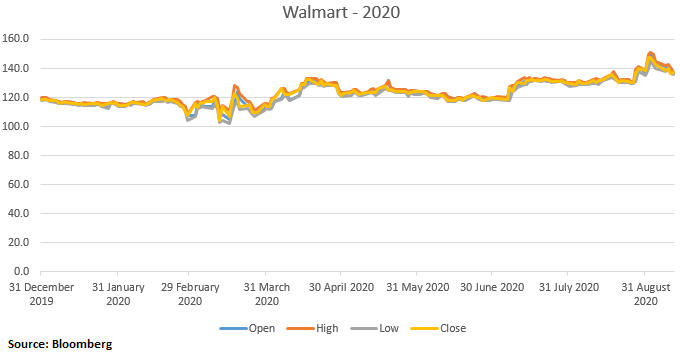